Created by the local mountaineering club, EOSNAL, this route starts in the middle of the village of Harakas, following the asphalt road towards Lambokambos, then west on a cement-surfaced road next to the church in the village cemetery. Shortly after the school sports grounds it becomes an unsurfaced road, turning northwest. After passing two unsurfaced roads, one to the right and another to the left, 2,800 m later it reaches a goat pen where the road ends.

From here, still moving in a northwesterly direction, a path leads to a fir forest, going up a gentle slope alongside a narrow stream bed. At an altitude of 970 m, on a plateau of terraced fields, it meets the 33 route some 2,200 m from the beginning of the path. It follows the 33, still moving northwest, for about 660 m as far as a large hollow, where it leaves the 33 to turn east. From the edge of the hollow, the path begins a gradual descent, passing a goatherd’s hut and a well, continues alongside a stream bed and 3,150 m after the hollow, crosses an old, wide path leading west (left) to Babala.

The path leads east (right) to the remains of an old cobbled path, passing through a natural gateway between rocks, continues on to the base of tall cliffs.  Continuing to wind downhill, some 3,800 m later it meets the main road to Kyparissi, close to and just above the old mill and chapel of the Panayia just before the settlement of Vrysi. Just 600 m before the end of the route is a short cut on a sharp curve in the road. 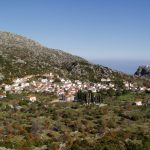 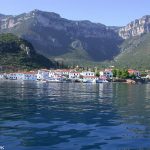