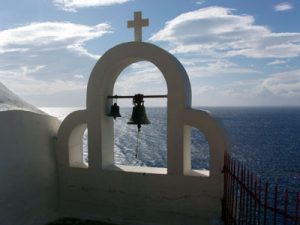 Looking for an absolutely unspoiled natural environment, a place of pilgrimage, inner peace?

Walk along the rugged coast of Cape Males to the monastery of Aghia Irini, right on the tip of the cape, where the land drops dramatically into the sea. 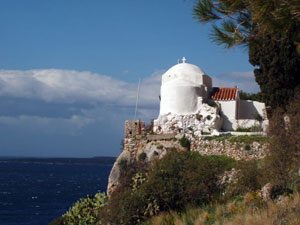 The way begins in the village of Aghios Nikolaos, a little further on from Neapoli. Follow the signs to Profitis Ilias; leave the asphalt road after the settlement of Valtaki and continue on an adequate unsurfaced road to Aghia Marina, the climbing area and petrified forest. At Aghia Marina are the last few houses before the cape, still used by a few families of livestock breeders despite the lack of electricity. In summer, campers and day trippers are to be found aplenty in the coves along this rocky coast, but in the off-season you are likely to be on your own. From here on the road surface becomes somewhat more challenging, although not impassable even for cars. Where it ends, continue on foot along the coastal path. A backpack and sturdy shoes are essential, and a cool head for heights. The path rises slightly at first, then descends to the rocks near the shoreline. At “The Horse” ( the narrowest point of the track from where a Turk Pasha riding his horse fell and was killed, according to the locals) you are in the middle of the way; then it is an uphill climb to a cobble-stoned surface worn down by generations of pilgrims. A rickety door lets you know you have arrived – close it behind you to prevent goats entering and grazing at whatever vegetation remains. A couple of more turns on the path bring you to the monastery buildings. 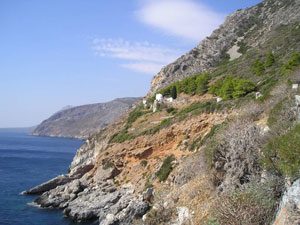 Inside the church is a water cistern. Although it is occasionally cleaned, the purity of the water cannot be guaranteed. The monks’ cells are supplied with essentials such as coffee and sugar. Relax and enjoy the spectacular views of Kythera, Antikythera and Crete. When you’ve recovered from your walk, explore the surroundings. Down at the little landing stage is a cave that in the old days was filled with human skeletons which, according to local legends, were the remains of pirates who killed each other fighting over their spoils.Others claim they belonged to monks slaughtered by Turks. Who knows? At the end of the path are the Byzantine chapels that have given the site the name of Little Mount Athos. One of them, in which there are more water cisterns, is said to have been built on the site of an ancient temple to Poseidon. In the chapel of Aghios Giorgos, the eyes of the saints painted on the walls have been gouged out, perhaps by pirates, perhaps by Turks, again, who knows. Up the slope is a hermitage used by the Venerable Thomas of Maleas. 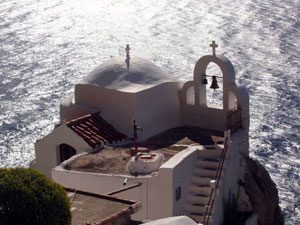 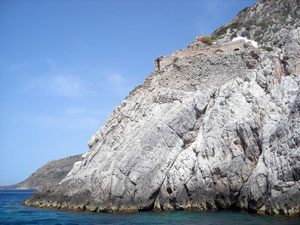 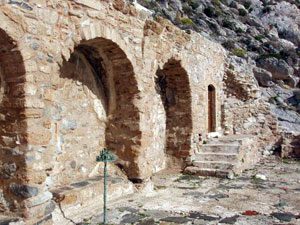 If you wish you may spend the night in the cells, which are kept clean. Get the keys in advance from the Friends of Cape Maleas Association. And if you have come alone, don’t worry, for someone once said: Here at Aghia Irini there are more stars in the sky!