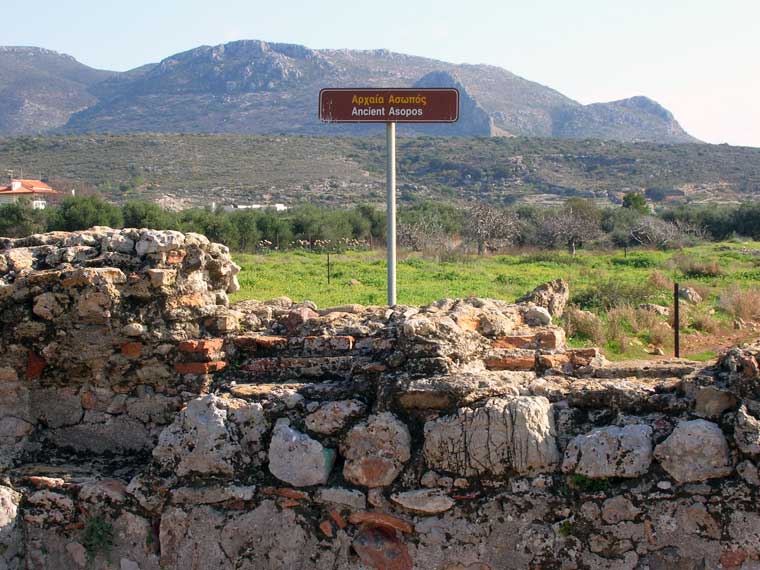 The ancient town of Asopos has been identified as the ruins on the small promontory southeast of the seaside settlement of Plytra. According to the inscriptions and excavations, the ancient town dates back to the late Hellenistic period. According to Pausanias, it was initially a member of the Lacedaemonian League and then the Free Laconian League.

Inscriptions also show that Gaius Julius Eurycles, the most important political figure in Laconia during the reign of Augustus, possessed land there.  Under Roman rule it was one of the most important towns on Cape Maleas and a major centre on the imperial Roman road network.  The town maintained its prominence at least until the early years of the Byzantine empire, according to contemporary sources and architectural remnants.

Ruins are still visible on the shore and on the seabed, as much of the ancient city is submerged. On the coast are tombs and at least two bath houses, one of which has mosaic floors and the ruins of other buildings and reservoirs.

On the sea bed southeast of the promontory and quite close to shore is part of a large Hellenistic structure, built of rectangular stone plinths sourced at ancient quarries nearby. The remains of what is possibly a submerged ancient mole are visible to the east of the promontory.

Location:
Plytra, near Asopos
Information:
Follow the sign to the archaeological site at the entrance to the port of Plytra. The land-based ruins are just a few metres further on, however the most impressive sights are underwater. Please note that scuba diving is not allowed, only goggles and snorkel.