The Monemvasia municipality boasts two of the best rock-climbing areas in Greece. The most well-known and best developed is Cape Maleas – Zobolo, at Aghios Nikolaos near Neapoli. It provides a number of alternative climbing sectors, some in full sun, some in shade, and is close to a number of excellent beaches, important historical and natural sights and some of the best hiking routes in the country.

Further north, at Kyparissi, is a climber’s paradise in a rugged landscape. This climbing area, with limitless possibilities for development, is dominated by the forested slopes of Mt. Parnon that drop suddenly into the Myrtoon Sea, providing climbers with stunning views.

Ever since being discovered a few years ago by Greek climbers, the rock climbing area of Kyparissi is now an international destination for enthusiasts of the sport.

What is special about it is the combination of the cliffs and superb views over the Aegean Sea as far as the islands of Hydra and Spetses, even Porto Heli, which seem to be at one’s feet.  On a clear day some of the Cycladic islands (Milos, Sifnos, Serifos or Kythnos) appear like rocks flung down into the deep blue sea.

So far 15 climbing routes have been established, thanks to the voluntary efforts of Greek and French climbers, who say there is a potential for hundreds of routes of varying difficulty.

The cliffs are limestone, vertical but with stalagmites, caves and in some cases over 50 metres high. Routes already opened are equipped with stainless steel bolts and are of medium to high difficulty.

Some of the routes are just a minute from the road, others are an hour’s walk. One area is right above the Carved Asclepium and the village.

Climbing holidays here are ideal throughout the year. In summer, there is the added attraction of clean pebbly beaches, at other times the network of hiking trails through forests to isolated chapels, historic monuments and cliffs with panoramic views of the open sea.

There are several hotels (total capacity 500 beds) and tavernas serving fresh fish and traditional dishes. There are two supermarkets, a bakery and three cafe-bars.

The local municipal bureau supplies equipment including SDS drills for those who wish to open up new routes on existing areas, in exchange for accommodation by arrangement with the municipality.

Kyparissi is reached from Molai (the seat of the Municipality of Monemvasia), a distance of 50 km, or from Sparta via Geraki, Aghios Dimitrios and Kremasti.

There is a bus service twice a week (Mondays and Fridays) from Molai.

On arriving in Kyparissi, the beginning of the climbing area is visible to the left as one reaches the first houses. The road leads on right underneath the main areas.

Best time to visit:
The climbing area of Kyparissi has a north-northeast orientation, making it ideal even in summer as the cliffs are largely in shadow, particularly in the afternoon.

A new rock climbing paradise is being developed in Laconia on Cape Maleas, since ancient times an important shipping lane and one that has often struck terror into the hearts of seamen. The cape is in the area known as Vatika, which is derived from the name of the ancient town of Vies.

Sheer rock faces rise up all around the cape, where a network of trails winds throughout the rugged scenery. Speliologists will find a number of caves scattered among the rocks, surrounded by the wide open sea bordered by peaceful coves.

The first climbing area is at Zobolo. The limestone face consists of terrain accessible for all levels of competence, with stalagmites, vertical rocks, crevasses, caves and many other features.  It has great potential for competitive climbing, or traditional climbs of up to five pitches.

Throughout the park there are now routes in three different areas. The first lies in the foothills of Mt. Zombolo (about 7 km from the village of Aghios Nikolaos) and comprises 70 routes, already known to many climbers. South-facing, it is suitable for winter climbs throughout the day, and in summer months early in the morning or early evening.

The northeast area, 300 metres away, has 34 routes, suitable for climbing after 1 p.m. in summer months.

In all three areas there are routes of varying levels of difficulty. For those who like a challenge, there are more difficult routes on the Hioni area that have not yet been opened up.

Most of the routes have been set up by Dimitris Titopoulos, who supervised the establishiment of all routes, as well as by D. Tsitsikas, G. Toreli and other well-known climbers.

The quality of the rock is excellent and the routes have been well secured, making the climbs enjoyable and safe.

The local cultural association provides free accommodation and equpment (by arrangement with Panayiotis Livanos) for climbers who would like to open up routes on existing walls.

For climbers who simply wish to visit, the closest accommodation is in Neapoli. Good restaurants are to be found in Aghios Nikolaos, Profitis Ilias and at Rismari beach.

For further information, please call Dimitris Titopoulos (6972247452) who opened up the first routes with Giorgos Koukis and Dimitra Klaoudatou, or call Panayiotis Livanos (6972697754) for accommodation and equipment.

From the main coast road in Neapoli, turn left at the sign for Aghios Nikolaos and Velanidia. Aghios Nikolaos is 7 km further on. At the entrance to the village, turn right onto a sealed road for 6.5 km until you meet an unsurfaced road with a sign directing you to Aghia Marina-Vromontas and the climbing area.

Best time to visit:
There are climbs for all seasons and nearly all times of the day 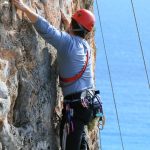 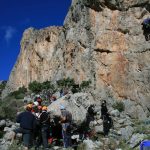 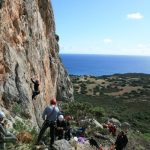 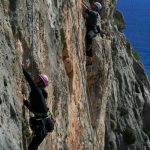 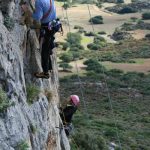 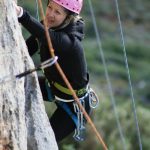 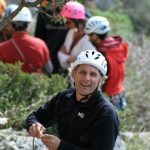 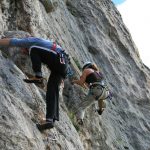 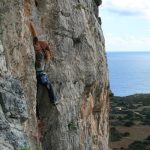 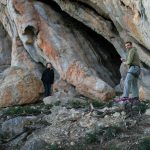 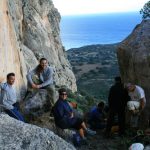 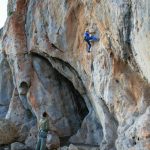 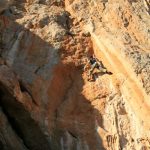