The cuisine of Monemvasia, Vatika and Zarakas is distinguished by the simplicity in which the dishes are prepared in order to highlight the natural goodness of the ingredients.

Locals have become used to the freshest products and avoid heavy sauces that mask the natural aromas of vegetables, meat and seafood.

So the recipes are simple, easy to follow, healthy and above all, delicious!

In the righthand column are just some of the recipes Laconians have been using for centuries.

Send your own recipe to tourism @ monemvasia.gr

For the syrup:
3 cups water,
3 cups sugar,
half cup thyme honey,
rind of an orange,
a cinnamon stick.

Strain the liquid and put one cup of it into a bowl. Add the oil, sugar, cinnamon and cloves, coconut, vanilla, brandy, grated rind, and the soda dissolved in the orange juice and the lemon joice. When all the ingredients are well mixed and dissolved in the liquid, sift in the flour and baking powder together, gradually, and knead well.

Break off small pieces of dough and form long thin strips, then cut these into small pieces (about 2 cm).
Place them on a sheet of greaseproof paper on a baking tray and bake at 200C.

Make the syrup by boiling all the ingredients, then remove the cinnamon stick. Pour the syrup over the cooked macarouitses and garnish with chopped walnuts.

As a variation, finely chopped walnuts can be added to the dough 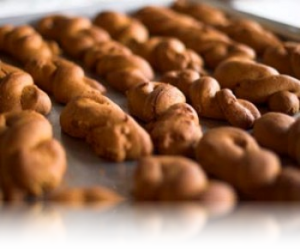 Put the grape must, olive oil, clove, cinnamon, cocoa, the currants and sugar in a bowl and beat well by hand.

Then add the soda and baking powder to the flour, then add to the grape mixture slowly, mix well.

Knead well, then cover the dough for a while to rest and then shape the cookies as desired.