Any town would be proud to have given birth to such a great man, such a wonderful poet as Yiannis Ritsos. Monemvasia, which Ritsos so loved and praised in his work, honours him every year in a festival aimed at highlighting the many facets of his personality and to acquaint younger generations with the universal messages reflected in his life and work.

“Remember me – he said
I walked thousands of kilometres
Without bread, without water,
On stones and thorns,
To bring you bread and water and roses….
remember me.”

Through his talent and skill, Yiannis Ritsos enriched his poetry with timeless values and ideals.

Standing at the helm of what he himself, at his 75th birthday celebrations in Chrysafitissa square, called the “stone ship”, the medieval fortress, he travelled the world in the name of peace. Journeying to “ports never seen before”, he used his poetry to take to the people of the world his message of democracy, freedom and social justice, but above all, of world peace and the coexistence of peoples.

Deeply ecumenical, but equally Greek, he clothed the people, landscapes and symbols of his poems with the beauty of Greece as it has evolved since Homer’s time.

Ritsos’ poetry is art dedicated to the service of humanity’s highest and most progressive ideals. 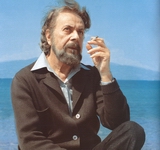 Yannis Ritsos was born in Monemvasia, in 1909, the youngest child of a wealthy family of landowners. His childhood was the only happy period of his early life, since the family soon faced financial ruin. Together with poverty came greater sufferings: the death of his brother Mimis, a cadet naval officer, from tuberculosis, in 1921, and the death of his mother, from the disease, a few months later. His father became insane and was to end his life in the Daphni Asylum, in 1938. The poet‘s sister Loula, loyal companion of his boyhood, was committed to the same institution in 1936.

Ritsos spent his high – school years, together with Loula, in Gytheion. In 1925 he came to Athens, to continue his studies, but he too was soon stricken by consumption. From then until about 1940, he spent much of his life in sanatoria – Sotiria, Kapsalona, Aghios Ioannis (Chania), Parnes. During the intervals of respite in Athens, he was forced to work hard, often in humiliating circumstances, to make ends meet.

In defiance of his ill fortune and the ever – looming spectre of death, Ritsos, who even as a child imagined himself as a poet, wrote incessantly. Poetry was his only solace. From 1929, the Socialist ideal, which he embraced in the Sotiria sanatorium where many political activists were patients, joined poetry as his constant refuge. His faith in the socialist vision of the future was to inspire his poetry too.

Between 1930 and 1934 he wrote the collections Tractors (published 1934) and pyramids (published 1935). In 1936, following the bloody repression of the tobacco – workers’ protest rally in Thessaloniki, he wrote in the Epitaphios. This work was included in the Metaxas Dictatorship’s list of subversive books, which publicly burnt outside the sanctuary of Olympian Zeus Athens.

From the mid- 1930s until the outbreak of the Second World War, Ritsos was employed as an actor and dancer in various theatres, including the National Theatre and the Opera. During the German Occupation he joined the literary section of the National Liberation Front (EAM).  A relapse of tuberculosis confined him to bed, where he wrote feverishly. ( Most of the works of this period were destroyed immediately after the violent anti-Communist clashes in December 1944 ). In that same month he followed the Left-wing forces that abandoned Athens In Arms, which was performed straight away.

In the early post-war years, Ritsos worked as an editor and proofreader for the Govostis publishing house and collaborated with the periodical Elefthera Grammata (Free Letters).

In 1948 he was deported to the village of Kontopouli on Lemnos. He was later exiled to Makronisos and finally to Ai-Stratis from where he was released in August 1952. Throughout this period his works were banned, but Ritsos continued his creative activity unabated.

In 1954 he married physician Garyfalio (Falitsa) Georgiadou and the following year (1955) their daughter Eri was born. In 1956, he was awarded the State Poetry Prize from the Moonlight Sonata.

The years from the mid- 1950s until the military dictatorship was imposed, in 1967, were the only truly peaceful ones in his life. Ritsos devoted himself exclusively to his writings and the poetry translations, with no other professional distractions. It should be noted that, at his life, not a day passed on which he did not write, no matter however adverse the conditions.

When the Junta seized power on 21 April 1967 the poet was arrested and taken to the Race Course, where political detainees were being held. He was subsequently sent into exile on the islet of Gyaros and later at Partheni on Leros. From October 1968 until the end of 1970 he was kept “under house arrest” at Karlovasi on Samos. Once again, his work was banned.

In 1977 he was awarded the Lenin Peace Prize.

The volume Fourth Dimension (1956 – 1975) is a collection of poetic monologues, such as the Moonlight Sonata, and monologues inspired by Mythology, Tragedy and Homer such as Orestes, Philoctetes, Chrystothemis, Helen. Through myth and history, as well as through contemporary social conflicts, Ritsos develops a poetic meditation upon man’s fate. The Fourth Dimension, along with the numerous collections of short poems written concurrently (Testimonies, Stones, Repetitions, Railing, Gestures, et al.), is the distillate of his human and poetic experience. With his visionary, laudatory compositions collected in the in the volumes Becoming and Songs of Victory, Ritsos completes his poetic testimony.

One hundred books of poems, four of plays and nine of prose under the general title Iconostasis of Anonymous Saints, have been published to date. His legacy also includes twelve books of translations and one book of essays. Ritsos’ work has been translated into forty different languages, and foreign editions of it currently number three hundred and ten.