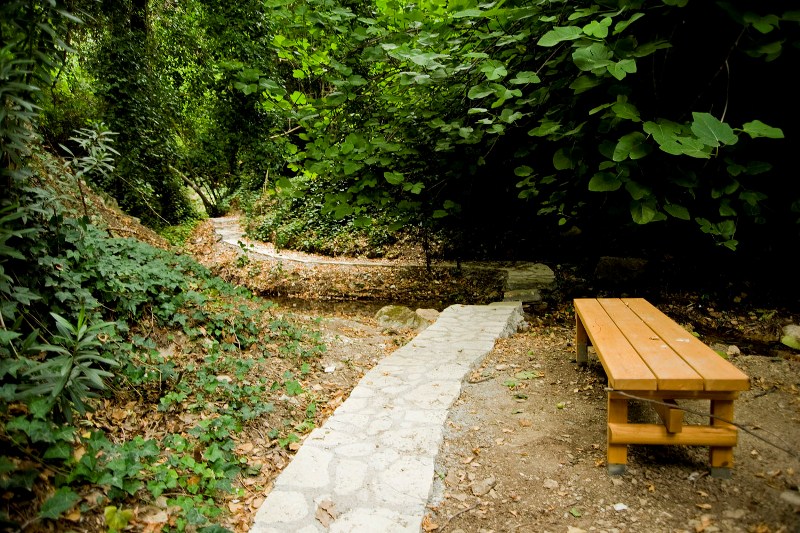 «There are some beautiful springs and gardens at Molai and two or three large towers which, like those at Paki, are more stoutly built than the usual Turkish towers,» (W.M. Leake, 1805).

The town of Molai is split by the Larnaka Gorge, so named because of the depression in the ground («larnaka») where water is collected for livestock that come to drink at three connecting watering holes.

The gorge begins at the top of Mt. Kourkoula (916 m. at its highest point, called Strongyla). In the past it used to reach right down to the plain. Today, however, the only section of it still untouched is from the centre of town up towards the mountain.

The gorge now serves as a recreation area for those wanting to enjoy nature.  The lower part of the gorge has been built over and has become a road leading to the hospital.

It was once in fact the heart of the region’s economy, as it was the site of 11 watermills, the last of which was closed during the 1970s when economic conditions changed.

From the geological point of view the gorge consists mainly of  slate and then limestone. There are also deposits of bauxite, granite and pyrites.

The gorge’s steep sides are thickly wooded and display a wide range of endemic flora, decorative shrubs, grasses and aromatic-medicinal herbs, berry trees and various species of mushrooms, among other species.

It is also a refuge for wild birds and animals – weasels, ferrets, foxes, hares, badgers, rodents, bats, tortoises, hedgehogs, foxes, feral cats, reptiles and amphibians such as frogs and crabs.

Mt.Kourkoula and the gorge are a Special Protection Zone for birds. A number of bird species nest there, such as peregrine falcons, Bonelli’s eagle, nightingales and eagle owls. It is also on the route of migrating birds such as doves,  quails, falcons, sparrows, pigeons, robins, larks, goldfinches, crows, blackbirds, woodcocks and thrush.

Next to the gorge at the top of a reddish rock (looking west and towards the mountain) is Molai’s old tower, a small fortress built in a rather inaccessible position with a view over the valley and the road that used to lead to Monemvasia. According to historians, it was either built by the Byzantines or the Turks, and plays a part in many a local myth and legend.

Behind the tower and a little lower down is the ruined chapel of Aghia Eleni. Next to it on the right, looking towards the west and the mountain is a later church of Aghia  Eleni which however was never consecrated and is also now in ruins.

To the left, looking towards the old tower, is the miracle-working church of Aghia Paraskevi, patron saint of Molai. On the saint’s day, 26 July, pilgrims gather here from far and wide. Opposite it to the northwest is the town’s home for the elderly.