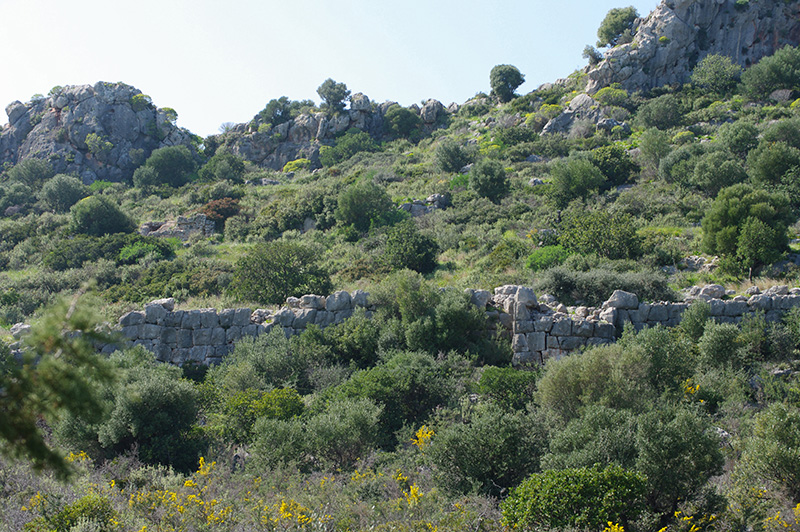 Epidaurus Limera, north of the town of Monemvasia, was one of the most important towns in ancient Laconia. Today, only a few traces remain of the city’s acropolis, near the modern settlement of Aghios Ioannis, Monemvasia.

According to the legend referred to by Pausanias (III 23, 6), its first inhabitants came from Epidaurus in the Argolid (where a famous ancient theatre still stands). They had abandoned their original home because of dreams and omens that appeared to them during a pilgrimage to the temple of Asclepium on the island of Kos.

They built a temple to Asclepius in the new town, which reached its peak during the Imperial Period, that is after the first century AD.

The site had been inhabited since prehistoric times, however, as artifacts (potsherds) dating from the Neolithic Age have been found around the acropolis.

During the Mycenaean period there must have been an important and thriving settlement where the acropolis stands. Unfortunately, no architectural remains of any such settlement have been found during the limited archaeological excavations that have taken place. However, its existence is assumed from findings in chamber tombs discovered in the nearby sites at Aghia Triada in Vamvakia, and at Palaiokastro, dating from the 15th to the 11th centuries BC, during the Late Helladic Period.

During the Archaic and Classical periods, Epidaurus Limera was one of Sparta’s perioeci (surrounding) towns and appears to have been the most important on the eastern coast of Cape Maleas.

It was destroyed twice by the Athenians during the Peloponnesian War as a show of strength against Sparta, in 424 and 414 BC (see Thucydides 4, 56 and 6, 105). Its walls were probably built during the 4th century BC or later.

Its development during the Classical Period has been confirmed by a reference to the name Epidaurus of Laconia in an inscriptioon containing a list of consuls from Karthaia, on the island of Kea, during the 4th century BC.

During the Roman period it belonged, according to Pausanias (III, 21.7) to the Free Laconian League, while inscriptions such as one referring to a territorial dispute between Epidaurus Limira and Zarakas were erected in the Temple of Apolllo Hyperteleatum in Finiki, Laconia. The names of priests from Epidaurus are also mentioned on bronze artifacts found in the the same temple.

Other findings at the acropolis, such as a building with a mosaic floor and an inscribed pedestal on which stood statues of Empress Julia Domna and members of her family dating from the 2nd century AD, indicate the town flourished during the Imperial Period.

Remnants of buildings dating from later antiquity are mainly to be found on the south side of the acropolis. The site must have been inhabited until at least the end of the 6th century AD, when neighbouring Monemvasia became the regional urban centre.

References to the archaeological remains of the acropolis were made as early as the 18th and 19th centuries, when a number of travellers such as Castellan, Boblaye, Leake and Curtius devoted lengthy chapters of their books to descriptions of the surviving ruins of this ancient town.

During the 1930s and 1950s excavations were carried out at the Vamvakia, Aghia Triada and Palaiokastro sites that also brought to light a large number of Mycenaean chamber tombs.

Location:
Aghios Ioannis, Monemvasia
Information:
On the road from Monemvasia to Gerakas, turn right before Aghios Ioannis. The archaeological site is about one kilometer further on.